Item No: EFBC-048
Material: Bronze/ Brass/ Copper
Size: life size or custom as your requirement
Wall Thickness: 5-6mm (can be adjusted depends on the size of sculpture)
Producing Time: About 30-50 days after receiving your order
Technology: Lost-Wax Casting Process
Advantage: Foundry Supplying Directly
Custom Made Service: We have our own 3D/drawing design team and artist clay master,we can produce all kinds of high quality art sculptures with right material according to your drawing or pictures.

St Mark statue is life size. St. Mark, a figure in the story of the Christian Bible. Mark is his
Roman name. The Jewish name is John. Her mother’s name is Mary, and her cousin’s name
is Barnabas.

He lived in Jerusalem and later became a meeting place for Christians. After Peter was captured
and released for the first time, he reported good news to Mark’s family. During his first
missionary trip, Barnabas went to Cyprus together. It is said that after Paul was sent to Rome,
he went to take care of Paul; When Peter came to Rome, he was Peter’s assistant. He preached in
Alexandria and was killed there. It is said that he wrote the gospel of Mark according to Peter’s
narration. Later, he became the city god of Venice, city symbol was the lion. The emblem of Venice
is a lion holding a copy of the gospel of Mark.

This statue is a tall St. Mark, standing there with an air of composure, holding the book mark gospel
in one hand and opening the other, as if describing the contents of mark Gospel vividly. He has clear
hair and beard. He wears a broad robe with clear folds and textures, as if a real person were standing
there. We have rich experience in the production of bronze sculptures, which can depict the images of
various characters vividly. If you need to customize exquisite character sculptures or various exquisite
religious sculptures, you can contact us for more details. 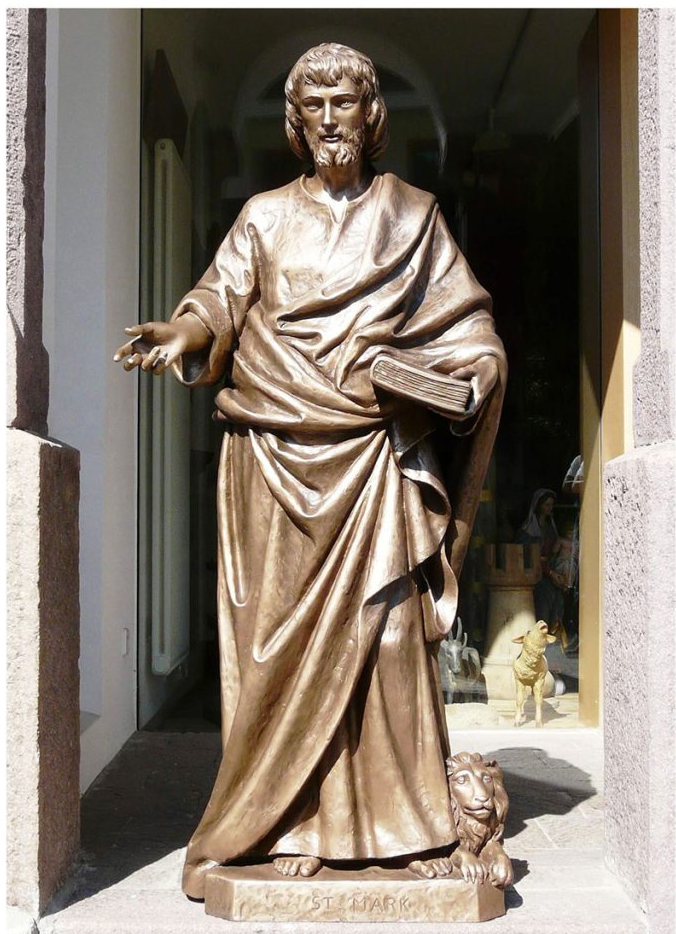 My artist will make 1:1 clay mold, when finished clay mold,  we will take photos for your reference.
The clay mold can modify any details till you’re satisfying with it. Then we go ahead to make statue.
When finished statue, also we will take phots for your reference. After you are satisfying with all,
I will arrange packing and shipment. Arturban sculpture can make large christian statue in bronze,
marble, fiberglass, stainless steel. Our team will make a production plan, according to your design,
budget, delivery time, or any other service. Our final aim is to supply high quality and cost-saving
sculpture efficiently.